Some of the views are easy to assess and we quickly discard or add to our mental toolbox.  Others can be more challenging to evaluate.  Three-word phrases and 5-minute videos stir up our emotions, tug on our thoughts, challenge preconceived notions, and can even spawn doubts in long-held beliefs.  In our fast-paced, data-driven world, these short bursts can be helpful as we merge from one thought to another.  But, there are dangers in merging traffic where people don’t stop to think things through.

I love music. I remember learning about the Pandora music service with great excitement. There are other similar music services available in the market now, but I understand they all work about the same. You enter a song, musician, or type of music that you want to listen to, and you are immediately served up a selection. You sit back and enjoy your favorite tunes as Pandora becomes your own personal jukebox! (Younger readers may need to Google that!)

Over the first few months, I created “stations” dedicated to 80’s rock and roll, show tunes, John Denver, Christian music, and instrumental movie themes. I thought I had my love of music by the tail! But then I learned a disturbing feature of the service. I would start off listening to powerful movie themes by John Williams and before I knew it, I was listening to country music! I found out the hard way that I had to use the buttons on the screen to like or dislike a certain song. If I didn’t stay in charge of what I was listening to, I would be carried off on a musical train that was going in a totally different direction than I had intended.

We need to guard against this Pandora effect as we encounter different perspectives on critical issues.  It might be a timeless issue like creation, purpose, morality, or destiny; or an emergent issue such as critical race theory, identity, or human sexuality. If we are not careful, we’ll start off with sincere open mindedness only to find out later that we are tied into beliefs, views, and even behaviors that conflict with truth and lie outside our value net. 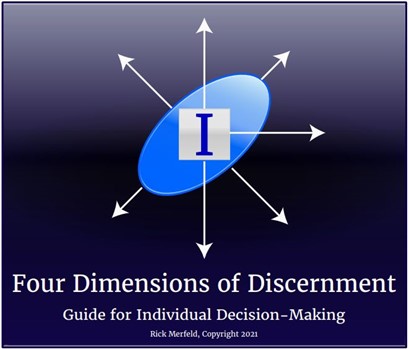 Diligent discernment is key.  The graphic shows us the four dimensions of discernment.

I think St. Paul understood that discernment takes time and effort, but he still encouraged us to “Not be conformed to this world, but be transformed by the renewing of your mind, that you may prove what is that good and acceptable and perfect will of God.” (Romans 12: 2)

Let’s be diligent about discernment as we continue to care for ourselves, families, and neighbors, both near and far.